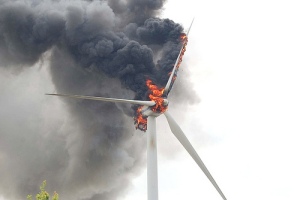 Anyone planning to cast a ballot on October 19th should take a careful look at progressive promises to invest in green energy technologies. The return on such investments will likely be very poor as Ontario, the United Kingdom, and Germany have already demonstrated. To date, the leaders’ debates and mainstream media coverage of the election have left some key questions unanswered by the Liberals and NDP (the Green Party, too, but they have no hope of forming a government).

In December 2013 an ice storm swept up from the Great Plains of the U.S. into southern Ontario and moved eastward across the province knocking out electric power for hundreds of thousands of homes and businesses. Toronto was particularly hard hit, some residents waited a week or more for power to be restored.

My family was without power for about a day; an inconvenience, far from catastrophic, and even somewhat enlightening. You very quickly comprehend how reliant we are on an uninterrupted supply of electricity when it is suddenly unavailable.

As a ratepayer concerned about the rising cost of electricity in Ontario and the provincial government’s headlong rush into renewables, I thought it might be interesting to see how the green energy plant was performing during the crisis. Viewing the Independent Electricity System Operator (IESO) website a day or two after the storm revealed that both wind and solar were effectively contributing nothing to meeting the power needs of Ontarians.

Wind turbines cannot be operated in icy weather conditions. Accumulated ice unbalances the rotor blades which may lead to a very expensive failure. Latitude and seasonality affect the amount and intensity of sunlight received by a particular patch of real estate, so photovoltaic panels in Ontario would have been at their least productive when the ice storm struck. Being capped with layers of ice and snow can’t have helped much either.

When service was restored it was electricity from Ontario’s nuclear, hydro, and gas-fired generating plants that flowed to customers. Ontario’s nuclear plants supply more than 60% of the electricity used in the province annually. During the ice storm and its aftermath they were humming along reliably while the renewables were stopped dead in their tracks.

Solar and wind are both plagued with a major, as yet unaddressed, problem – intermittency. Solar and wind are often at peak output when there is no concurrent demand for that output, and produce nothing when demand is at its highest. Unlike zero-emissions nuclear power plants, they are largely unfit for purpose.

Capacity utilization in Ontario is about 83% for nuclear plants and around 26% for wind. A simple analysis using IESO and other publicly available data suggests that replacing the fleet of nuclear power plants in Ontario would require more than 20,000 wind turbines at a conservatively estimated cost of more than eighty billion dollars. To provide gas-fired back-up capacity or some form of energy storage system to meet demand when the wind isn’t blowing would add billions more to that estimate – all for a net gain of zero in terms of reduced emissions.

Like many environmentalists, the signatories to the recently unveiled ‘Leap Manifesto’, believe that we must decarbonize immediately to save the planet and that we can meet all of our energy needs with wind and solar power. The manifesto is just one more indicator of how hopelessly optimistic and misguided these green enthusiasts are. Even without the damage to the distribution network during the ice storm, thousands of residents would still have been freezing in the dark if the province had to rely entirely on wind and solar to supply its electricity.

I also checked the IESO website this past July 28, when southern Ontario was experiencing a heat wave. In the middle of the afternoon, there was no wind and virtually no electricity being generated by the scores of wind turbines standing motionless in the countryside. Demand for electricity was peaking as homes and businesses cranked up their air conditioning. Once again, nuclear, hydro, and gas-fired generators fed the grid and kept everyone cool. Solar contributed less than one half of one per cent of generated output during the day, and of course nothing once the sun had set.

A key actor in the Ontario Liberal government’s decision to adopt renewables as the way forward was Gerald Butts. He had then-premier Dalton McGuinty’s ear just as he now has Justin Trudeau’s in his role as Trudeau’s principal advisor. Butts is a fervent environmentalist who used to head up WWF Canada. He’s on record saying, “…100 per cent sustainable, renewable energy is possible and economical by 2050 if we start the transition today.” For the record, WWF Canada opposes nuclear power generation so it’s probably reasonable to assume this is Mr. Butts’ and Mr. Trudeau’s position also.

While campaigning in Trois Rivières on September 2, Trudeau declared, “Ensuring that our infrastructure is able to adapt to new challenges – like climate change and threats to our water and land – is essential to our future prosperity.” He then laid out his party’s plans to address this perceived deficiency through (presumably deficit-financed) infrastructure “investments”. These investments will include the establishment of a “…Canada Infrastructure Bank to provide low-cost financing for infrastructure projects, and Green Bonds to support renewable energy projects.” The Liberals promise to “…use new financing instruments to stimulate investment in retrofits and distributed energy systems.”

In short, the federal Liberals will adopt the ruinous policy that Gerald Butts sold to their provincial counterparts in Ontario. It’s extraordinary that these radical and economically unsound positions are part of a major party’s platform, particularly a platform founded on the belief that public investment is what is needed to kick-start the national economy. The return ratepayers in Ontario have seen from the McGuinty/Wynne “investments” in green energy is worse than the output of a solar panel at midnight – less than zero. We don’t need to borrow money to repeat those mistakes nationally.

The NDP are no less committed than the Liberals to this fanciful line of thought. Tom Mulcair, presumably to reinforce his credibility on this file, frequently reminds us that he held the Environment portfolio as an MNA in Québec. In a 2013 speech to the Economic Club of Canada Mulcair said in order to ensure Canada’s long-term prosperity an NDP government would, “…invest in modern, clean energy technology that will keep Canada on the cutting edge of energy development and ensure affordable energy rates into the future.” The NDP has always opposed nuclear power so we can be pretty sure the range of investment options Mr. Mulcair is considering is pretty limited.

Mulcair also told the Economic Club audience that, “We will rise to meet our international climate change obligations by creating a cap-and-trade system that puts a clear market price on carbon.” Mr. Trudeau also talks about putting a price on carbon. The revenues generated will presumably be directed to “clean technology” investments so favoured by both leaders, and both are practically champing at the bit for a chance to commit Canada to massive emissions reductions at the Paris COP in December.

As an informed, concerned member of Canada’s electorate I think Mulcair and Trudeau owe voters explicit details about how their vague plans to limit emissions, price carbon, and “invest” in renewables will deliver the low-, or no-carbon robust economy they each promise. I believe that the positions of Liberal advisor Gerald Butts and Leap Manifesto author Naomi Klein are extreme, unaffordable and ultimately counter to the national interest.

So, Mr. Mulcair, Mr. Trudeau, please tell us how much do we need to reduce emissions by, and what will the effect on the global climate be if we make these cuts, bearing in mind that Canada is responsible for less than 2% of world emissions? If the solution is renewables, what is the target proportion of our energy mix for these technologies and what will it cost to achieve? Most forecasts suggest that renewables, including biofuels, will be only 10-20% of the global energy mix by 2050. How will we ensure the global competitiveness of our industries and the financial security of Canadians if they must shoulder additional tax burdens, higher costs for carbon-based fuels, and ongoing subsidies for renewables? We need substantive answers to these questions, and more. Asking voters to take a leap of faith just doesn’t cut it.

Access to affordable, reliable energy delivered the prosperity Canadians enjoy today. How we will maintain that foundation, or at least avoid materially damaging it, is the most important conversation we haven’t had in this election to date. The progressive parties, with their ill-defined plans to “invest in green technology” have provided plenty of reasons for Canadians to be very wary of the future they promise.